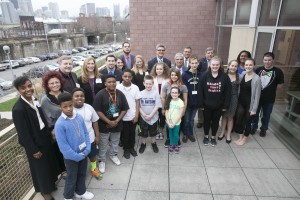 The afternoon’s festivities kicked off with a quick speech by State Senator Wayne Fontana, who stressed that for him, the importance of the Afterschool Crawl was to “feel it, see it, be a part of it.” He continued to explain that he wanted to “hear directly from the kids.” Fontana addressed the misconception that “afterschool is just babysit[ing]” with the direct retort, “this just wasn’t true.”  All of the programs featured stressed both academic and enrichment advancement, as well as life skills such as public speaking and leadership.

Youthworks, a Program of Goodwill of Southwestern Pennsylvania, was the first program featured. In a roundtable discussion, elected officials, the program’s high school-aged participants and program alumni spoke candidly with each other, asking questions, sharing their views and experiences. Small group discussion was more intimate and animated. Sophia Duck, program manager, was proud of her students and said that it was “great to see them sitting across the table from each other.” 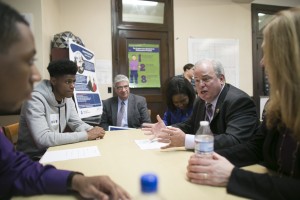 The second stop on the tour took the group to University Prep in the Hill District, where participants in The Neighborhood Learning Alliance’s pghGLO program demonstrated an example of the enrichment portion of their programming to the group. The personal story activity used word prompts including leadership and creative to spur personal storytelling by the teens. It was another way for the elected officials to hear firsthand from the students.

Next was Higher Achievement Pittsburgh, where 11-year-old Stephon Jackson gave an overview of the program and further reinforced Fontana’s statement that afterschool programming is not babysitting. “We get to do fun things,” he explained. “But they also help us with our education.” Jackson, who is running for the role of Higher Achievement ambassador, practiced his public speaking and took questions from the audience–just like the elected officials in the audience have to do on a daily basis.

The bus ride back to the Sarah Heinz House allowed further discussion amongst the elected officials. Representative Hal English used a seed metaphor to describe how important afterschool programming is, using comparisons to a seed that is given water and sunlight versus one that is not. He believes that taking a small kernel of interest and nurturing it will allow kids to grow and succeed. 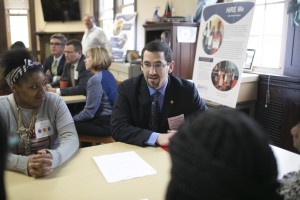 Jason Ortitay was English’s seatmate on the bus ride back to the Sarah Heinz House. He commented that the event was “eye opening and a lot to take in,” while on his Facebook page, he publically commended afterschool programming: “These organizations are doing wonderful things for the Pittsburgh region, and their afterschool programs are playing a very important role in the development of our youth. I believe programs like these are vital to the future success of our young people.”

The casual atmosphere was conducive to many discussions and gave people who are not often together in the same room the opportunity to speak about what they felt were the important reasons to support afterschool programs. The event’s agenda was completed by elementary-aged participants at the Sarah Heinz House taking the elected officials on guided tours of what the organization had to offer. 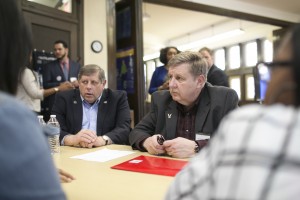 Kirk Holbrook (Legislative Assistant) made closing remarks on behalf of State Representative Jake Wheatley Jr., stressing that Wheatley’s office “is a tremendous supporter of quality afterschool programming. And while lots of good is being done, the senator looks forward to addressing areas where there is a lack of quality programming.” Holbrook addressed the future of afterschool in Allegheny County by noting that “Representative Wheatley was just appointed to a caucus on afterschool and will be returning to Pittsburgh for support and insight from his constituents.”

After the event, Mila Yochum, Director of APOST called the
event a success and commented, “The tour is first of many interactions we will have with elected officials as we advocate and educate them, working towards a dedicated line item in the state budget for quality afterschool programming.”